This is 5 sections of German barbed wire this is the early war wire much thicker then the later one the sections are all around 13 inches long.The wire has all stuck together with rust and dried mud exactly how it was found it in is in relic but solid condition it is rusty but not crumbling or braking up and still covered in mud and dirt and a nice find from the battlefield.The wire was recovered in 2016 from the surface of Delville Woods the battle raged from 15th July – 3rd September 1916 on the Somme. A very nice iconic relic from The famous Somme battlefield.

From the end of August to 5 September the 24th Division had c. 2,000 casualties. Details of German losses are incomplete, particularly for Prussian divisions, due to the loss of records to Allied bombing in World war 2 From 15–27 July the 7th and 8th divisions of IV Corps held the line from Delville Wood to Bazentin le Petit and lost 9,494 casualties. The 5th Division was not relieved from Delville Wood until 3 August and lost c. 5,000 casualties, a greater loss than at Verdun in May. Infantry Regiment 26, which had been at full strength on 13 July was reduced 260 men on 20 July. Miles wrote that many German divisions returned from a period on the Somme with losses greater than c. 4,500 men.Bavarian Infantry Regiment 5 of the 4th Bavarian Division recorded "the loss of many good, irreplaceable men".Photo below is the road along Delville Wood in 1916. 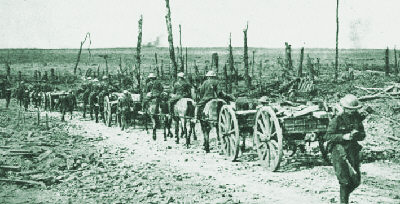