This is a nice and RARE air frame panel it is part of a engine back plate it is rusty but solid it is 2 parts riveted together and it has ripped and bent up by the impact of the crash the section is 9 inches long by 4 inches wide.The part comes from German Arado 234 jet number 140589 shot down 14th March 1945 attacking Remagen Bridge in Germany and is VERY RARE to get such a  section from German Arado jet It comes with A5 information laminated sheet and a very nice relic from the very famous jet fighter.

Arado 234 B-2 Jet fighter bomber work number 140589 F1+AS 9/KG76 the pilot was Oberfeldwebel Bruchlos he was killed when the jet was shot down attacking the Remagen Bridge on the 14th March 1945.

The most notable use of the Arado 234 in the bomber role was the attempt to destroy the Ludendorff Bridge at Remagen. Between 7 March, when it was captured by the Allies, and 17 March, when it finally collapsed, the bridge was continually attacked by Ar 234s of III/KG 76 carrying 1,000 kg (2,200 lb) bombs. The aircraft continued to fight in a scattered fashion until Germany surrendered on 8 May 1945. Overall from mid-1944 until the end of the war a total of 210 aircraft were built. In February 1945, production was switched to the C variant. It was hoped that by November 1945 production would reach 500 per month. 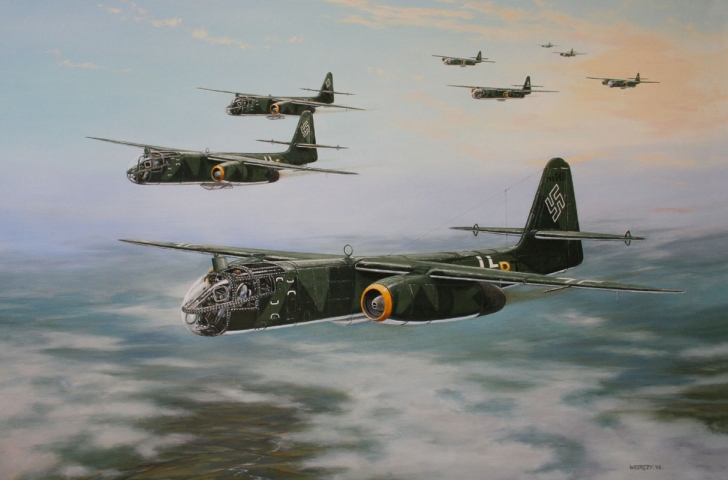