This is American 30 caliber M1 steel ammunition tin,with some of its original markings and its lid but the lid has rusted solid on to the tin and does not open.The tin has some of its original green paint work on the outside it does have a fair bit of surface rust and one large rust hole in the bottom corner and a couple on one side it is a very nice condition ammunition tin especially for a battlefield recovered relic that was only recovered very recently from the forest it has been cleaned so some of the original colour is there and it is perfect for display or any collection.This tin was recovered from the woods near the Elsenborn Ridge in the Ardennes Forest from the scene of the battle of the bulge in the winter of 1944-1945 a very nice and rare relic from this famous battle and Hitler's last big offensive of the war.

The .30 caliber M1 steel ammunition can box was developed to deliver belts of 250 .30-06 cartridges for the .30 Cal. M1917 Browning machine gun. It has also been used for various calibers in cartons, clips, bandoleers or other packaging. The .30 cal. steel M1 ammo can replaced the wood Cal .30 Ammunition Box early in the war. The M1 ammo can typically held a cloth or link belt of .30-06 cartridges. 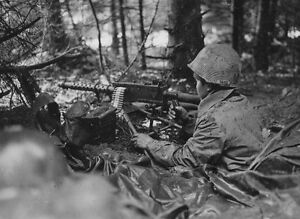