This is a German soldiers M40 steel helmet which still has very clear to see lots of original blue paintwork inside and outside at least 70%-80% more on the outside and inside but very rare bit lovely Luftwaffe eagle decal pretty clear to see it has no leather liner. This helmet is lightly rusted and a bit pitted but is still smooth to the touch pretty much all over it does still have some dirt and muck attached but the very rare bit still its original foliage strap still attached this is a bit fragile but along with the helmet it is very solid and not braking up or falling apart. The helmet has battle damage impact hits to the side and the back which have bent it also impact hole in one side it does have a few rust holes nothing to bad at all it has been very well cleaned and retains a lot of original colour it is perfect for display or any collection and rare to get so battle damaged with paintwork decal and strap from the battlefield in this condition. The helmet was used by Fallshirmjager soldier as it was recovered from the Roncey Pocket the battle in July 1944 in Normandy. The helmet comes with A5 laminated information cards with pictures. 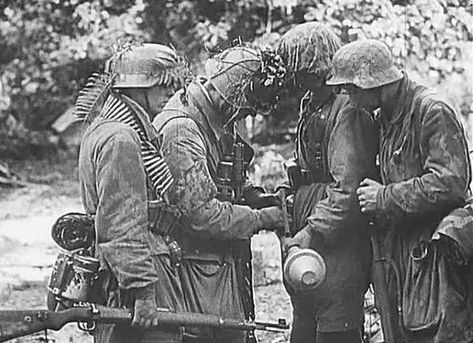