£0.00
Free Shipping!
This is a blown section of front shield from German 3.7cm PAK 36 anti tank gun.The shield section which still has some remains of the original paintwork it is in relic but solid condition does have some blast damage from an explosion ripped and bent around the edges but a solid lump of plate which is a large size at 14 inches long by 13 inches wide and is perfect for display or any collection.This shield section was recovered from the area of Priekule in the Kurland pocket defended by the SS Nordland Division during the battle a nice relic from the battlefield of 1944-1945 in Latvia. A lovely piece of battlefield history from one of the most famous pockets on the Eastern Front and used by the famous SS.The wheel comes with a laminated A5 information sheet with picture. 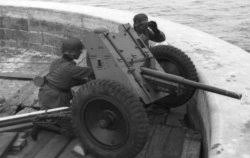