This is a very rare find from the battlefield part of a small collection of parts from a British first World War Tank the first time ever i have had tank parts like this from the Somme.This is a British 6 pounder brass shell case dated 1917 which was fired by the tanks main armament.This case is in relic but solid condition the brass has turned green the case has all its markings on the bottom that can be seen it is not crumbling or braking up and it has been very well cleaned and is a nice and rare part for any collection perfect to display.The brass case was recovered in 2015 from British Mark 5 Tank destroyed during the Battle of Le Hamel on the 4th July 1918,Australian and American offensive on the Somme.With this item comes a A5 laminated information card with photographs of the start of the recovery in 2015 this initial find near the surface more parts were found deeper down and some of the larger items that were found. A very rare Tank relic from the famous 1918 German spring offensive and the Allied counter attack on the Somme battlefield.

These parts were recovered in 2016 from the site of a destroyed British mark V tank in woods on the outskirts of Le Hamel; an area which several British Tanks were lost during the battle on that Summer Day.

The Mark V Tank made its combat debut during the battle at Le Hamel where approximately 60 tanks, many of them British mark V’s successfully supported Australian and American troops during battle and captured the Village. The mark V tanks were used in eight major actions before the end of the war.

The Battle of Le Hamel was fought on the 4 July 1918 and was an attack by the Australians supported for first time by American forces with British Tanks. General Sir John Monash, Commander of the Australian Corps, planned for an attack to dislodge the German position on a spur of high ground outside the Village. The frontage of the attack was about 3 miles wide from Villers-Bretonneux village in the south to Le Hamel in the north, with Vaire and Le Hamel woods between these villages. General Monash selected the date of the attack as 4 July as American Independence Day for the date of the attack in honour of the American involvement in this battle. German casualties numbered about 2,000, with another 1,600 taken prisoner. Australian casualties were about 1,400 of whom about 250 were killed.Below a Mark 5 Tank and Australian soldiers beside tank that was disabled in fight for Le Hamel. 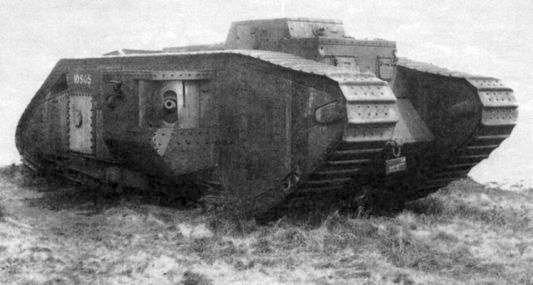