This is a British 1938 pattern mark 2 brodie helmet that belonged to a soldier who was either in the 2nd Battalion of the Gloucestershire regiment or the 4th Battalion of the Oxfordshire-Buckinghamshire Light Infantry Regiment.The helmet is in relic condition but nice solid still fairly smooth finnish on the outside it is dated 1939 on the chin strap clips but it is missing its leather liner the helmet does not have any rust holes but does have large amount of battle damage a large blast or impact cracks and holes on the top it does still have some original dark green paintwork it has been very well cleaned and in overall very good condition.This helmet was recovered from around the Town of Cassel from the battle that was fought in May 1940 during the fighting around the Dunkirk pocket.This is a cracking relic that has lovely history as well know the nearly exactly what regiment it comes from this is a cracking relic from the famous Dunkirk pocket battle of 1940.

THIS ITEM IS FREE UK SHIPPING. FOR INTERNATIONAL BUYERS IT IS AT A REDUCED RATE PLEASE ASK BEFORE PURCHASE.

In May 1940 during the battle of France the 2nd Battalion, Gloucestershire and the 4th Oxfordshire and Buckinghamshire Light Infantry held Cassel for three days as part of the defensive screen around Dunkirk during the Battle of Dunkirk and evacuation from the 27 May 1940 to the 30 May 1940. The British forces had prepared a defence on the hilltop, emplacing anti-tank guns and barricading the narrow streets of the town. After scoring initial successes against the tanks of Panzer Regiment 11, which had made the mistake of advancing without infantry support, the British garrison was heavily attacked from the ground and the air by German forces. Much of the town was reduced to ruins by bombing. Most of the garrison's members were killed or captured by the Germans during the fighting or the subsequent attempted breakout towards Dunkirk, but the defence they had put up played an important role in holding up the Germans while the Dunkirk evacuation was taking place. 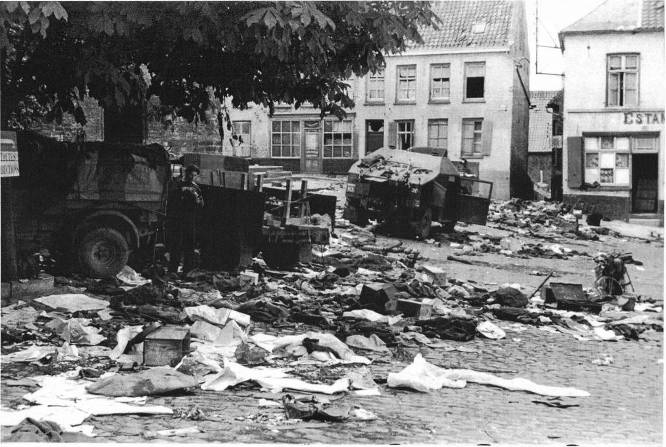 British soldiers taken POW at Cassel and Cassel after the battle