This is a Russian 76mm Divisional gun M1902 brass shell case dated 1916 re used in the second war by the Russian Army. The case is in nice condition with no major damage but does have some cracks in the neck from being fired the case still retains its brass colour but has partly discoloured from being buried. The case is complete on the bottom with most of its original markings clear to see it is dated 1916 but the 6 is very faint hard to see but other then that the case is perfect for display or collection. The case was recovered in The Demyansk Pocket near Leningrad in Russia the battle was from 8 February to 21 April 1942 and is a unusual find from the battlefield rare to get World War 1 cases re used in the Second war by the Russians. 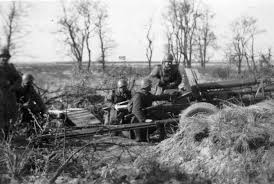