German Fuel can the famous Jerry can maker marked rare dated 1942, some original black paintwork recovered on the Sevastopol battlefield in the Crimea 1941- 1942

This is a German fuel can the famous Jerry can which has all maker stamps and markings and is dated 1942 the maker stamp is NS which is more unusual to find. The can has some of its original black paintwork on with a the nice unusual maker stamp clear to see in the middle and Wehrmacht on the bottom of the front. The can which has some small dents and knocks from use and with a few small rust holes in the bottom it has light surface rust all over but not any heavy thick rust the cap still opens and closes also locks perfectly well it is in overall very nice condition and a very nice example of this famous fuel can battlefield found and more semi-relic then full relic which has been very well cleaned and is perfect for display or any collection. The can was recovered from Sevastopol the battlefield in the Crimea 1941- 1942 . 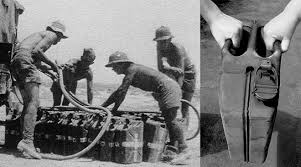 German Fuel can the famous Jerry can maker marked rare dated 1942, some original black paintwork recovered on the Sevastopol battlefield in the Crimea 1941- 1942