This is a trio of German 20mm cannon cases used by flak 30/38 ant aircraft gun the cases are empty and inert with some of there maker markings dates 1938-1939 and waffen stamps that can be seen on the bottom. The cases are not there brass colour they have discoloured from being buried one is not complete missing its top section they are a little bit damaged from being buried a bit of damage around the neck from being fired they have been very well cleaned and are perfect for display or any collection. The shell cases were recovered from the Sevastopol battlefield of 1941-1942 in the Crimea the Germans last big victory in the East. 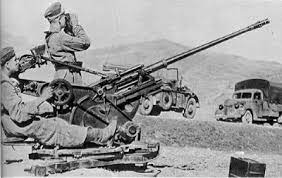