£28.00
Free Shipping!
This is a German mg 34 early war aluminium made ammunition tin with some original black paintwork and has no date or maker marking that can be seen but has lovely original white painted German markings on the lid and the sides .The lid still opens,closes and does not lock as it is missing and the front side panel is loose from the the tin its self the tin is in relic condition but very good condition for a relic with a lot of original colours but does have some rust holes and damage from being buried and there is still some dirt and mucked attached from the recovery but not much at all and unusual to find from the battlefield in such good condition with so much paintwork the tin has about 60-70% of its original paint work on the outside the inside is a bit dirty but in nice condition on the lid the handle has rusted in place but a nice battlefield relic.The tin was recovered from the Demyansk Pocket in Russia 1941-1942 battlefield.The Demyansk Pocket the battle was from 8 February to 21 April 1942. A lovely piece of history from the this famous battle on the Eastern Front. 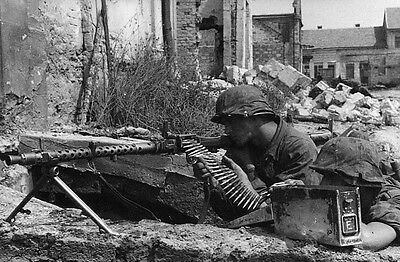