This is a German soldiers battle damaged shovel head which is missing its wooden handle.The head is rusty but solid it has been lightly cleaned and is perfect for display or any collection.This shovel was recovered from Broodseinde Ridge the October 1917 battle part of the battles around the Ypres salient in the later part of the war.A very nice find from the famous Ypres battlefield of 1914-1918 in Belgium. 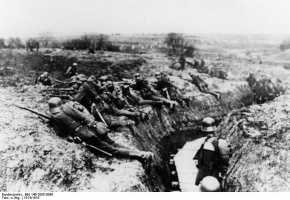