This is a rare battlefield find German soldiers M40 helmet which is a nice solid relic fairly smooth to the touch inside the outside pitted but with a massive amount of original paintwork and the rare bit single Army decal fairy clear to see.The helmet still with about 50 % of its original dark green paintwork on the inside a lot not so much on the outside.The helmet does not still have its leather liner or chin strap.The shell is rusty but has no rust holes it is still very solid also has some remains of dirt and clay attached from the sticky ground it was buried in but it has been very well cleaned and is perfect for display or any collection and some of the best paintwork i have seen on a recovered German helmet from the Eastern front.This helmet was recovered along with 2 others from the same hole were recovered just outside Sevastopol the battlefield of 1941-1942 in the Crimea the Germans last big victory in East. 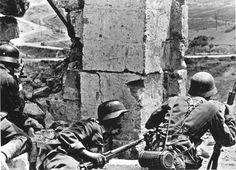