This is a Handle bar from German Army Zundapp KS 750 motorcycle which is in relic but solid condition.The bar still has remains of its rubber grips with maker marking on also has brake leavers and wiring still attached it has been very well cleaned and is perfect for display or any collection and a unusual find from the battlefield.The handle bar has been recovered from the Falaise Pocket in Normandy a nice and rare relic from the iconic battle in the summer of 1944.This wheel section comes with a laminated A5 information sheet with photos.

The Falaise Pocket or Battle of the Falaise Pocket (12–21 August 1944) was the decisive engagement of the Battle of Normandy. A pocket was formed around Falaise in which the German Army Group B, with the 7th Army and the Fifth panzer army (formerly Panzergruppe West) were encircled by the Western Allies. The battle is also referred to as the Battle of the Falaise Gap, after the corridor which the Germans sought to maintain to allow their escape and is sometimes referred to as the Chambois Pocket, the Falaise-Chambois Pocket, the Argentan–Falaise Pocket or the Trun–Chambois Gap. The battle resulted in the destruction of most of Army Group B west of the Seine river, which opened the way to Paris and the German border for the Allied armies. 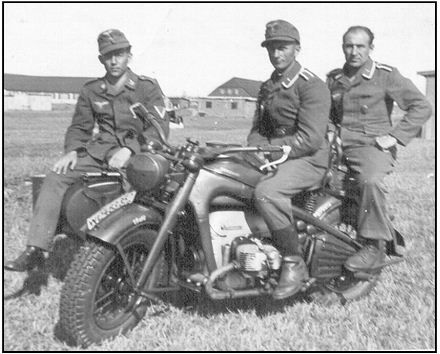