This is a German machine gun MG42 stand.The stand is rusty and in relic condition and one of the legs has broken and is missing but overall relic but solid not braking up at all perfect condition for display or any collection.The stand has been nicely cleaned after recovery but still covered in silt from the lake bed but is still a fantastic recognisable relic and a unusual find from the battlefield.The stand was recovered from a Lake South of Berlin in the area the 9th Army fought and surrendered in April 1945 during the battle of Berlin. A lovely piece of iconic battle history from the days of the Third Reich and the fall of Berlin. 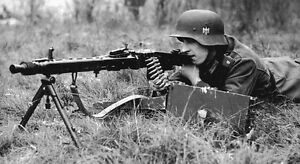