This is a rare French Chasseur or mountain troop soldiers M15 Adrian helmet still complete with the remains of its badge.The helmet which is in relic but solid condition and does have some rust holes in it there is still some paint remains in a few places on the helmet most of it on the inside it is missing its liner and chinstrap.The helmet has some battle damage with a few shrapnel holes and one big blast rip on the back of it the helmet has no liner or chin strap this helmet was lost in the heat of battle it is rusty but does tell a story .This helmet was recovered from around Hill 304 and Malancourt area of the March - May 1916 battle which was the large German advance towards Verdun.A very nice and rare relic from this famous battlefield. 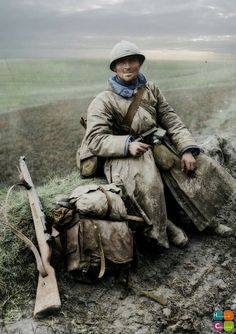