This is a Russian 45mm anti-tank gun brass shell case dated 1939 in relic condition but a nice relic.The case is complete with major damage around the top ripped and bent by being fired or from being hit from enemy fire it has some light surface rust in places and has turned green from being buried it has all of its stamps and markings on the bottom of it the case is in very nice condition for a battlefield recovered case.The case was recovered from the Demyansk Pocket in Russia 1941-1942 battlefield.The Demyansk Pocket the battle was from 8 February to 21 April 1942. A lovely piece of history from the this famous battle on the Eastern Front.

The 45 mm anti-tank gun model 1937 (factory designation 53-K) was a light quick-firing anti-tank gun used in the first stage of the German-Soviet War. It was created by Soviet artillery designer M.N. Loginov after the arrest and execution of former designer V. Bering. Due to insufficient armor penetration it was replaced in service by the long-barreled 45 mm anti-tank gun M1942 (M-42).

The design was finalized 7 November 1936 and resulting light semi-automatic anti-tank gun was adopted for Red Army service in early 1937, and thus known as "45 mm anti-tank gun M1937" (Russian: 45-мм противотанковая пушка образца 1937 года). These guns were used in the first stage of the German-Soviet War, but their anti-armor capabilities allowed them to fight successfully only with German light tanks and armored personnel carriers. Early models of the Panzer III and Panzer IV could also be knocked out at close range, but this put Soviet artillerymen in greater danger. Due to these circumstances, model 1937 guns were replaced with the all-new design, the more powerful model 1942. The mass production of outdated model 1937 guns was stopped in 1943. The total number of guns produced was 37,354. 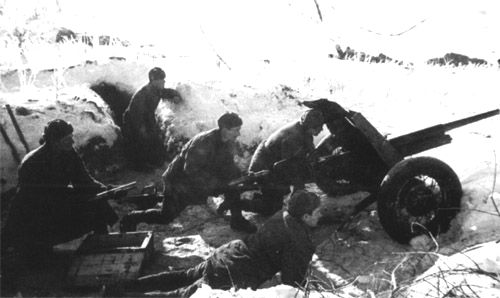