This is a rare to find Section of aluminium tubed airframe section which is maker stamped 115 which means Heinkel 115.The section  still retains its original colour it is in lovely clean condition this section has ripped and bent by the impact of the crash and has a connector joint at one end looks like it is a section of wing or tail flap connector bar the whole thing is still solid this is a rare bit of recognisable German bomber and to be such a condition is so rare to find the section is 12 inches long.This airframe structure was recovered from German Heinkel he 115 Seaplane of 3/kustenfliegergruppe 906 crashed at 11.31pm on the 7th June 1940 in Suffolk.The airframe section comes with a A5 laminated information card with crash site photos.

The crew of the Heinkel he 115 were Oberleutnant Zur See A.Van Hullen and Feldwebel.L.Fehr both were killed.Feldwebel P.Randorf bailed out but died of his injuries on the 9th June 1940. The minelaying Heinkel 115s of kustenfliegergruppe 906 came down at Eyke near Woodbridge Suffolk in the grounds of Eyke Rectory on the night of June 7-8. Officially it is reported to have been disorientated by searchlights, but local people believe the pilot mistook a mist which often forms in this field for a sea mist and attempted to land the seaplane on what the pilot thought was water. As it hit the ground its mine exploded blasting a crater and scattering wreckage for hundreds of yards. The photos below are taken on the morning of the crash and show the wreckage of the plane. 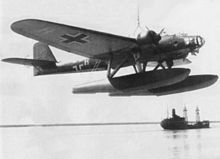