This is a VERY RARE German near complete rubber dinghy with near all its original markings and stamps even has rope attached the rubber still retains its original colours a fantastic example of this war time dinghy it is in nice solid condition perfect for display would even clean up if you wanted to and 100% original bit of original Kriegsmarine equipment and a RARE find from a German U boat.The dinghy was recovered from inside U534 which was sunk on the 5th May 1945 and she was recovered in 1993 all these items were sold off by the museum as they had to many items to display and not enough space to do so. A very nice relic from the famous U boat war of the North Atlantic.This item comes with a laminated A5 information sheet with information and photos. 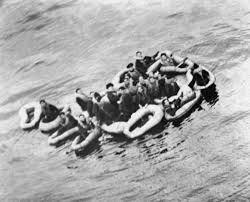 Survivors from U-625 tie their dinghies together for support.