French model 1897 time and percussion fuse for 75mm field gun shrapnel shell, with markings nice relic condition recovered in 2011 from around Hill 304 and Malancourt area the March - May 1916 battle in Verdun

This is a French model 1897 time and percussion fuse for the model 1897, 75mm field gun standard use Artillery peace in the French Army. The shrapnel shell head has some damage from the impact of being fired some impact marks and dents also around the bottom steel base it has rust damage. The brass head is in nice condition still a dirty brass colour and has some of its original markings and numbers on the dials fairly clear to see the bottom steel section has been nicely cleaned but is more relic then the top part the head is in nice solid condition and is perfect for display or any collection. This shell head was recovered in 2011 from around Hill 304 and Malancourt area of the March - May 1916 battle which was the large German advance towards Verdun. A very nice French relic from the famous French defence of the Verdun battlefield during the early years of the war.. 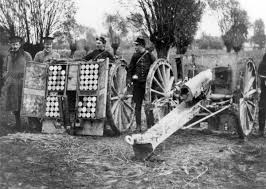 French model 1897 time and percussion fuse for 75mm field gun shrapnel shell, with markings nice relic condition recovered in 2011 from around Hill 304 and Malancourt area the March - May 1916 battle in Verdun