This is a very rare find from the battlefield a near complete German K98 rifle wood with trigger section really not relic condition better then that. The wood and metal work both retain a lot of original colours the metal trigger section and trigger are loose from the wood the metal is only lightly pitted. The wood its self is pretty much undamaged it has been used and does wear and tear from use it has been nicely cleaned would be perfect for a restoration project or for display or any collection. This rifle properly used by solider in 26th Volksgrenadier Division as they were the last ones defending the village it was found on a local brocante or boot fair in Bras a village just outside Bastogne this village is were British and American forces both re captured it from the Germans during the fighting in early 1945. This rifle was used in the fighting that took place in the Ardennes Forest during the battle of the Bulge in the winter of 1944-1945.A very nice unusual relic found in September 2020 in Belgium ware it has been since the battle. The rifle wood comes with A5 laminated information card.

The rifle was properly used by the 26th Volksgrenadier Division because on the 13th January 1945 they were the last German soldiers occupying the village of Bras near Bastogne at the end of the Battle of the Bulge. On the following day the village of Bras was liberated, and a historic meeting took place when the American forces linked up with the British forces and drove the Germans back into Germany.

The 26. Volksgrenadier-Division was formed in September 1944 on the training ground Warthelager near Posen from 26th Infantry Division and manpower from the partially formed 582 Volksgrenadier Division It was sent to the western front and saw action in the Ardennes suffering heavy losses. The remains of the division went into captivity in the Harz Mountains in April 1945. 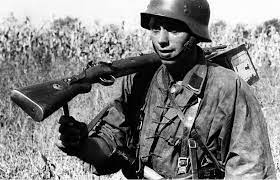