This is a VERY RARE 8.8cm KwK 43 shell case in nice condition fired by German King Tiger tank of 503 Heavy Tank Battalion .This shell case is complete it is rusty but solid it is relic but overall in fantastic condition for a steel made shell case.On the bottom of the case it is complete with its primer and has no markings but the case its self is very solid with very few rust holes and small dents properly done when the case was fired by the tank the case has been very well cleaned and is perfect for display or any collection .The case is so very rare to find from the battle field especially in this condition from the famous King Tiger tank and from a  battlefield ware there is very little about.The shell case was recovered in 2017 on the outskirts of Budapest the Hungarian Capital City during roadworks the case would have been fired in October 1944 during the battle to capture the City by the Germans. This shell case comes with a laminated A5 information sheet with information and photos.A very nice and rare relic from the famous king tiger tank in action on the Eastern Front.Below photo of King Tiger in Budapest in October 1944.

On 15 October 1944, Tiger IIs of 503rd Heavy Panzer Battalion played a crucial role during Operation Panzerfaust, supporting Otto Skorzeny’s troops in taking the Hungarian capital of Budapest, which ensured that the country remained with the Axis until the end of the war. The 503rd then took part in the Battle of Debrecen. The 503rd remained in the Hungarian theater of operations for 166 days, during which it accounted for at least 121 Soviet tanks, 244 anti-tank guns and artillery pieces, five aircraft and a train. This was set against the loss of 25 Tiger IIs; ten were knocked out by Soviet troops and burned out, two were sent back to Vienna for a factory overhaul, while thirteen were blown up by their crews for various reasons, usually to prevent them from falling into enemy hands. Kurt Knispel, the highest scoring tank ace of all time (162 enemy AFVs destroyed), also served with the 503rd, and was killed in action on 29 April 1945 in his Tiger II

THIS ITEM IS FREE UK SHIPPING. FOR INTERNATIONAL BUYERS. IT IS AT A REDUCED RATE. PLEASE ASK BEFORE PURCHASE. THIS ITEM CAN ONLY BE SHIPPED TO THE UK AND EUROPE. 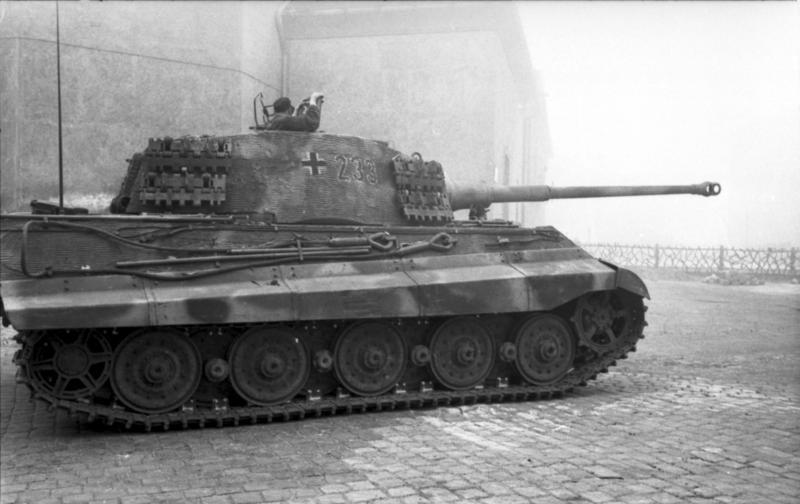 king tiger tank in Budapest in 1944