This is a pair of German soldiers aluminium mess tin lids  both with black paintwork remains all over very clear to see one has soldiers initials on it. This is a pair of aluminium made mess tin lids are in nice solid condition with no holes in there from being buried they are not complete missing there clips they are pretty much there shape not damaged they are still retain a lot of there original colour they are in relic but solid condition but overall very good, nice condition for a recovered battlefield finds nicely cleaned and perfect for display or any collection. The mess tins were probably used by soldiers of 132nd Infantry Division as they were the troops in the area but it was a very heavily fought over area for a period of time so could possibly be from soldiers in another German unit the mess tin lid was recovered from near a lake in Cherka area of Sevastopol the battlefield in the Crimea 1941- 1942 .

Operation Sturgeon Haul, the final assault on Sevastopol, was one of the very few joint service German operations of World War II, with two German corps and a Romanian corps supported by a huge artillery siege train on the 4th July 1942 Thirty thousand Soviets surrendered and in July itself a total of 90,000 prisoners were taken also 467 guns, 758 mortars, and 155 antitank guns captured. Two more Soviet armies were smashed and an estimated 50,000 of the enemy killed on the battlefield. Including civilians, Soviet casualties were about 250,000 for the entire siege. Despite Manstein’s efforts to spare his infantry and crush the defenders with overwhelming bombardment, official Eleventh Army losses numbered 4,337 dead, 1,591 missing, and 18,183 wounded. Actual casualties were probably much higher, up to 75,000. In addition, they had used up 46,700 tons of munitions and 20,000 tons of Bombs. 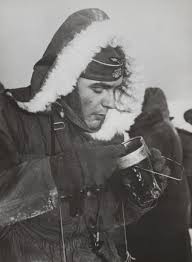