This is a very unusual and rare find from the battlefield hand grip for American Browning M1917 machine gun. The grip is  it is a very nice condition bottle especially for a battlefield recovered relic that was only recovered very recently from the forest it has been cleaned so some of the original colour is there and it is perfect for display or any collection and comes with a laminated A5 information card with picture. This bottle was recovered from the woods near the Elsenborn Ridge in the Ardennes Forest from the scene of the battle of the bulge in the winter of 1944-1945 a very nice and rare relic from this famous battle and Hitler's last big offensive of the war.

The Battle of Elsenborn Ridge was the only sector of the American front lines during the Battle of the Bulge where the Germans failed to advance. The battle centred on Elsenborn Ridge east of Elsenborn, Belgium. In this region, Elsenborn Ridge marks the westernmost ridge of the Ardennes rising more than 600 meters above sea level; unlike the upland’s further north, east and south, it has been extensively logged for agriculture. West of Elsenborn Ridge, where the land descends in gentle hills down to the cities of Liège and Spa, was a vast array of Allied supplies and the well-developed road network leading to the Meuse River and Antwerp. The Germans planned on using two key rollbahns or routes through the area to seize Antwerp and force a separate peace with the United States and Britain. Capturing Monschau, the nearby village of Höfen, and the twin villages of Rocherath-Krinkelt just east of Elsenborn Ridge, were key to the success of the German plans, and Hitler committed his best armoured units and infantry troops to the area, including the 12th SS Panzer Division Hitlerjugend. 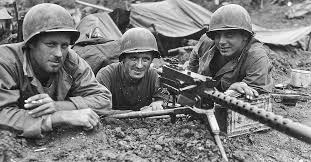